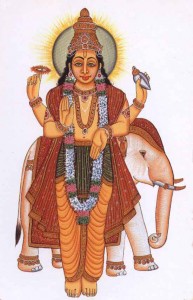 A very momentous planetary transit has just occurred in Vedic astrology, or Jyotish.  The most revered benevolent planet in Vedic astrology has moved into its highest spiritual placement.  An exalted Jupiter has changed constellations or nakshatras from Punarvasu to Pushya. Jupiter in Pushya nakshatra is a placement that Indians highly anticipate, as it occurs once every twelve years.

Jupiter went into exaltation in Cancer last month.  Jupiter is considered to be at its greatest point of exaltation in Pushya nakshatra.  Each nakshatra has an associated symbol and presiding deity. The symbol for Pushya nakshatra is the udder of a cow. Cows are revered as sacred animals in India for their capacity to selflessly provide milk, which can also be turned into butter and yogurt.

The cow is also the only animal which will provide milk to animals which are not its own.   This innate inclination to nurture can manifest in Pushya dominant individuals (particularly those with Jupiter in Pushya, Pushya Moon, or ascendant natally in Pushya) in a multitude of ways – physically, emotionally, spiritually, etc.

The presiding deity for Pushya nakshatra is Brihaspati, another appellation for Jupiter. In Sanskrit, Jupiter is translated as Guru. Guru is a name given to a (often spiritual) teacher. The prefix gu- translates as darkness and the suffix –ru translates as light. Thus, a Guru is one who can take us from ignorance to enlightenment.  Therefore, Pushya also has the auspicious association with spiritual and religious themes.

Jupiter is the significator for religious and spiritual activities in Vedic astrology. Thus, Jupiter in Pushya nakshatra can be a very significant time to perform spiritual austerities and to reap the rewards of your practices.  Jupiter is the planetary ruler for Thursdays in the Vedic calendar. Thursdays are known as Guruvar or the day or the Guru. 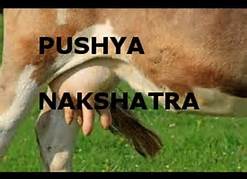 Pushya nakshatra is considered the most humanitarian of all 27 nakshatras, and Jupiter the most benefic of the nine planets.  Jupiter in Pushya nakshatra is an ideal time to partake in situations which allow you to advise, mentor, and guide others. It’s a time for selfless open-hearted giving.

Astronomically, Pushya nakshatra is situated from 3 degrees 20 minutes Cancer to 16 degrees 40 minutes Cancer.  Jupitet’s greatest exaltation is at 5 degrees Cancer. This is when we can most optimize our spiritual practices and nurture others.  Jupiter reaches this point on July 11 and 12.  This very auspiciously coincides with the Indian holiday dedicated to honoring one’s Guru – Guru Purnima.  If you have revered teachers, it is very uplifting to honor them on thisGuru Purnima 2014.

Jupiter remains in Pushya nakshatra until September 2, 2014.  Then Jupiter enters Ashlesha nakshatra and remains there for its duration in Cancer.