Home
Uncategorized
“There is no such thing as a radiation exposure that will not do damage.” — Dr. Rosalie Bertell 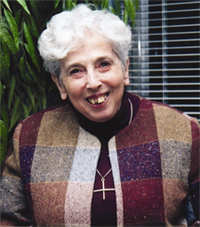 “There is no such thing as a radiation exposure that will not do damage. There is a hundred per cent possibility that there will be damage to cells. The next question is: which damage do you care about?” Dr. Rosalie Bertell, 1990

Dr. Rosalie Bertell, author, distinguished American scientist, environmental activist, international expert on radiation, and sister of the Grey Nuns of the Sacred Heart, died yesterday after a long illness. She was 83. She had been battling cancer over the past two years. According to Sister Julia C. Lanigan, president of the Grey Nuns, Dr. Bertell “was hospitalized this past week for advanced chronic obstructive pulmonary disease.”

Dr. Bertell also assisted the people of the Philippines with problems stemming from toxic waste left by the US military on their abandoned military bases, “worked with the government of Ireland to hold Britain responsible for the radioactive pollution of the Irish Sea, and assisted Gulf War Veterans and Iraqi citizens dealing with illnesses caused by the Gulf War. She served as a consultant to local, provincial and federal governments, unions and citizen organizations.”

As a small child Rosalie was frail; and she told me that she knew early on she would become a nun. Her parents also encouraged her studies in mathematics and music. Her Canadian mother, the late Helen Twohey Bertell, was the inspiration for her lifetime of activism; and her American father, the late Paul Bertell, encouraged her scientific interests. In 1966, Rosalie Bertell received her Ph.D. degree in Biometrics [the use of mathematical analysis of biological observations to understand and predict biological processes] with minors in biology and biochemistry.

In the 1970s, she landed a job at the world’s first cancer research center, Roswell Park Cancer Institute. It was here that she began her lifetime commitment to “writing, lecturing, researching and advising ways of dealing with the chemical and nuclear hazards which endanger the environment and erode the health of people worldwide until shortly before her death.”

Dr. Bertell related: “I was a senior cancer research scientist studying the harm done to a large population by unnecessary uses of diagnostic medical X-ray. I became outraged when I found that nuclear power plants were releasing radioactive materials (like X-rays) at this same level routinely, indiscriminately exposing the unsuspecting public. My first experience was a nuclear plant, which wanted to locate its facility next to the Gerber’s Baby Food Farm in Barker, NY. That plant was never built.” (This was the first time the nuclear industry was denied a US location.)

Often called the “anti-nuclear nun”, Dr. Bertell was a tireless crusader and educator for warning about the vast damage and destruction of our planet’s ecosystems. Her interest and commitment to educating people about the extreme dangers of nuclear radiation began in 1972 while she was recuperating from a heart attack. It was then that she discovered the data concerning the nuclear bombings of Hiroshima and Nagasaki.

She noted: “I also prayed to know what small part I could play in helping to restore some humanitarian concerns to our society, which could so thoughtlessly wipe out 150,000 old men and women, mothers and children. I believe that we need to use our time and talents in as efficient a way as possible.”

In 1985, her first book, “No Immediate Danger: Prognosis for a Radioactive Earth”, was published in London to critical acclaim. The book describes in detail the breath and scope of what radiation does –not just high rates of terminal cancers, but also how ionizing radiation (“penetrating man-made) radiation exposure affects the human body. In 1986, Dr. Bertell, was part of Chernobyl’s investigative team; and she worked with thousands of tragic survivors of the nuclear reactor disaster.

In a 1990 speech in Oslo, Norway, Dr. Bertell noted that radiation increases susceptibility to “many different diseases, including weakened immune systems, congenital defects, miscarriages, long-term chronic diseases, genetic mutation (hence on-going damage of and degradation to the genepool (i.e. the future)), as well as leukemia and other blood diseases.” She further noted:

“Take for example just one atom of plutonium in a lung tissue. In exploding it shoots out particles of energy through living cells. As you know a cell is not empty, but a living system filled with different types of matter with separate jobs to do in the body. We cannot feel anything of this explosion on cellular level. But it will do damage. …The damage that is apt to cause most trouble in a whole system like a human being, is the damage that hits the nucleus of the cell. Because inside the nucleus is the chromosome material that carries the template of what the cell does. If you change that, you change what the cell produces. If you change one cell, and it is still able to produce, it makes two cells with damaged chromosomes which can cause exponential growth of cells that are not going to do the right thing.”

Dr. Bertell’s second ground-breaking book, “Planet Earth: The Latest Weapon of War” was published in 2000. This book brilliantly documents the hidden and lethal military agendas of vast harm with new generations of super-weapons, such as HAARP [High Frequency active Auroral Research Program]. With more than 25 such arrays around the planet (including at least one mobile unit that was seen docked in Seattle last year), our entire planet and all its inhabitants are uninformed experimental lab “rats” for military harm. There has never been any public discussion about these fatal programs of geo-engineered weather modification.

“Planet Earth” exposes how for many decades the military has been secretly conducting numerous experiments, including various high-level nuclear explosions. These may disturb the fundamental layers of the atmosphere that protect all of us from lethal solar radiation. Dr. Bertell noted that these experiments are often conducted without even discussing with non-military experts the enormous dangers of damaging these life-preserving earth-veils. Dr. Bertell believed that such experiments may already have accelerated and contributed to earthquakes and freak weather conditions.

In 2007, Pierpalo Mittica’s “Chernobyl: The Hidden Legacy” was published. Dr. Bertell was one of the co-authors. She contributed a significant report on the devastation this nuclear reactor continues to have on the Ukranian population as well as the rest of the world. As with Fukushima’s 2011 horrific nuclear disaster, the radiation toll, not just for the Japanese population, but the entire world remains with us forever.

Dr. Bertell is the recipient of five honorary degrees. Among her many awards are the 1986 Right Livelihood Award, known as the Alternative Nobel Prize; World Federalist Peace Award; Ontario Premier’s Council on Health, Health Innovator Award; the United Nations Environment Programme Global 500 award and the Sean MacBride International Peace Prize. In 2005, she was selected to be one of the 1,000 Peace Women nominated for the Nobel Peace Prize. She published more than 100 articles, and was editor of the journal, “International Perspectives in Public Health”.

For more than five decades, her religious life centered around the Grey Nuns of the Sacred Heart, Yardley, PA, which she joined in 1958. Her academic affiliations included: Associate Professor of Mathematics at D’Youville College, Buffalo, NY, from 1969 to 1973; and Senior Cancer Research Scientist at Roswell Park Memorial Hospital in Buffalo, NY, 1970-78. She was Assistant Research Professor, Graduate School, State University of New York [SUNY] in Buffalo, for four years, and Director of Research and Biostatistical/Radiation Health Consultant at the Ministry of Concern for Public Health, Buffalo, NY.

At 83, and despite serious illness these past two years, Dr. Bertell was still active: “writing articles and answering mail, working with the public to continue to inform them of the risks and dangers of military environmental testing and the nuclear industry.” She credits her most rewarding achievement to be “discovering so many sensible, concerned people throughout the world, who are asking only to make a decent living and peacefully bring up their children, sharing the wealth of the planet with everyone else and all living things! I have found such people in each of the more than 60 countries where I have worked. Ordinary people know that our current environmental policies are based on greed and are not life supporting or sustainable.”

Just before she entered the hospital, we were in touch again. She was unable to talk above a whisper over the past two years, but she was alert and concerned about the devastation the numerous HAARP facilities were doing to “wreck our health and destroy weather” as she told me. Here’s a short youtube video:

Rosalie Bertell’s devotion to her spiritual life was central to who she was. Beyond the cloistered walls, however, the larger picture of her life was her genius and commitment to educating us about our lifetime exposure hazards of nuclear war and secret weather modification agendas. We are blessed to have her scientific writings, lectures, videos, and books as inspirational beacons.