Home
Uncategorized
Risk Of Autism Doubled Due To Circumcision: Study 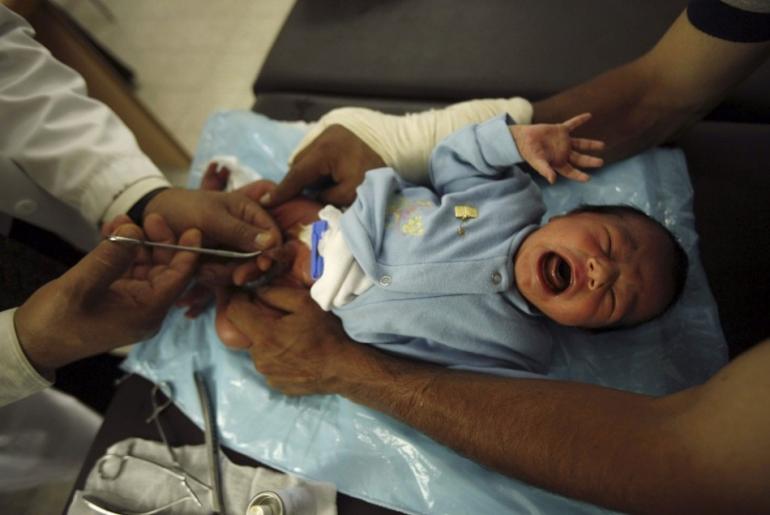 A Palestinian baby is circumcised at Patient Care Association in Gaza May 20, 2010. Circumcision is a common surgery for Muslims in accordance to the teachings of Prophet Mohammed. They believe that it purifies the body from dirtiness, and immunizes it from diseases. REUTERS/Mohammed Salem (GAZA – Tags: HEALTH SOCIETY RELIGION)

A research study by scientists at the Statens Serum Institut (SSI), a sector research institute in Copenhagen, Denmark, has found that circumcision before a boy turns five years old could double the risk of being affected by autism spectrum disorder, a condition which affects the way that a person interacts with others and causes impairment in thinking and social areas. The study took into account the situation of more than 340,000 boys in Denmark who were below the age of 10. The finding of the study was published in the Journal of the Royal Society of Medicine.

According to The Australian, the study found that the chances of a circumcised boy below the age of 10 being affected by autism was increased by 46 percent. It was also found that if the boy was circumcised before the age of 5, the risks of ASD was doubled. The study likewise discovered that the chances of boys from non-Muslim families undergoing circumcision developing hyperactivity disorder was higher.  The scientists were of the belief that the finding could be linked to stress that was caused by the suffering during the procedure.

Professor Morten Frisch, a senior investigator who conducts epidemiological research at the SSI and lead author of the study, said that their study was conducted because of the combination of recent findings in animals that showed that a single injury could result in lifelong deficits in response to stress and a study that involved a correlation between circumcision and prevalence of autism spectrum disorder. It was found that long-term alterations in the perception of pain which is a characteristic noticed in children who are autistic, was associated with painful experiences in newborn babies and animals.

Frisch explained that the mechanisms that was linking pain in early life and stress to an increase in risk of psychological, neurodevelopmental or behavioural problems in adult life was incomplete and needed more research. He said that the practice of non-therapeutic circumcision was widespead around the world in infancy as well as in childhood and that their findings prompted researchers to study the possibility of the trauma caused by circumcision and its risk of neurodevelopmental and psychological consequences.