Part II in an ongoing series from a Contributing Health Coach

In our previous article on Monatomic Gold, we observed the historical uses of “Potable Gold” or gold in a fine colloidal under 100nm. In reality historical and present day uses of gold for healing are too numerous to list and are fully available on the Internet. There are a small number of modern studies done on colloidal gold and we have referenced two.[1] They both show marked improvement in many areas of health and cognition, from improved motor skills to better sight and memory. One of the main findings was that the smaller the gold particles the greater the effect.

The first case is a gentleman who at 37 has fought with full body inflammation for decades.  He tried every possible avenue and treatment with no real reduction of the symptoms. The costs of his efforts were staggering and he had all but given up but then he discovered he was electro-sensitive. Taking measures to limit his exposure his symptoms reduced many fold, but still lingered and spiked at times of stress.

He started using the MG topically on his face and the symptoms reduced again significantly. Then, the effectiveness became spotty and he realized the MG was most effective if applied to clean dry skin. The dirt, oils and salt in the skin all act to limit and spoil the GM’s effect. The oil blocks absorption and is acidic causing the MG to cluster to larger size. The dirt works like a sponge as the gold and silica bond to it. Finally the salt in our sweat is ionic and causes the MG to cluster to a colloidal or metallic gold on contact.

By deep cleaning his face and then scrubbing with a dry towel till red he was able to get excellent results. The MG has not cured his electro-sensitivity but does control the symptoms well when nothing else works.

The next case is that of my own as I have suffered rosacea on my face since my twenties. After a deep body cleansing the rash went away so I knew it was a food allergy. Slowly adding items back to my diet I discovered it was dairy and my heart sank, as I love cheese with a passion. I found raw dairy products were much less aggravating but the issue persisted. Then I found MG and the oozing rash would heal over night, literally. After applying it before bed I awoke to many layers of dried dead skin with only fresh pink skin underneath.

After applying it for weeks with good results I stopped, but kept eating dairy and it came back. Again I applied the MG and overnight the oozing sores and redness were gone. So it does not seem to cure the issue, but it keeps it in complete remission with regular use. I also have a history of skin cancer and when a new one popped up, MG was used three times a day for 60 days until it shrunk to nothing.

Next, we have a case of a 71-year-old woman, the mother of a best friend. She was diagnosed with stage four leukemia and was about to start chemo. She drank three bottles of 1.5% MG over a few weeks and three months later was given the “all clear” from her oncologist. She lived for another ten months and died from a stroke “with her boots on” during a hot summer’s day in her grape orchard; she was 72.

The next case is that of one of the main developers of MG, he is a 68 year old male; we’ll call him David.

David had a long-term infection of the herpes virus and after many years it settled in his feet. Long term alcohol and tobacco abuse had weakend his system and he also had a hyperthyroid condition. These conditions were all diagnosed and confirmed by an MD. His feet worsened to a point that the doctors said he would have to amputate his legs from the knee down and then he might survive this systemic infection for a few more years. Luckily he did not have insurance or the funds to cover the $35,000 it would cost.

David had been suffering terrible pain for over ten years and was finally confined to a wheel chair with his legs black and ulcerated almost to his knees. He had been drinking the MG but it had little effect; then inspired by another user’s success with topical application on agent-orange boils, he began topical application. After three months and about a half-gallon of low percentage MG he could walk again, but the most amazing developments were that his thyroid and herpes conditions disappeared.

His doctors confirmed this again and when David requested his records, he was met with a very aggressive attitude and told to get lost. The poor doctors thought they had misdiagnosed him terribly and felt they had a huge lawsuit coming; after all they had given him thyroxin.

So, now David’s feet are functional but fragile as any cut or bite often leads to another major systemic infection which he usually can treat with 1.5% MG. This worked for some time; then he was bitten by a spider causing a major systemic infection in his foot. Finally, he used some 4.25%MG and had instant burning pain along with massive dermal release of toxins and waste. We believe it is the MG acting as a biocatalyst as it bonds with hemoglobin and leucocytes to massively increase the rate of repair and immune response.

Remember MG is highly catalytic when bonded with metal oxides. The endgame process was that for about three weeks large layers of dead skin would continually form and peal off of  his feet, at times looking like a shed snakeskin in the shape of a human foot. His feet are now better than ever and he never even thinks about losing them.

The next case is quite similar, but was conducted on a vagrant that had severely cut his hand and developed gangrene up to his elbow. He was lying in an alley comatose in a sleeping bag with his arm propped up; the smell from the infection was pungent. Finding this poor soul, David poured three bottles of MG on his arm over a three day period and within a week the man was on his feet.

The same thing happened as happened to David; as his hand healed he would peal off huge layers of dead skin sometimes looking like a glove. Travis found many of these in the alley over the week as he brought the man food. In the end the man had a complete recovery.

The following list of known anecdotal effects of MG (Monatomic Gold) has been observed from our direct, firsthand experience. Perhaps in Part III we will further elaborate each case in detail:

•  Return of hyperthyroid to normal

•  Reversal of systemic infection from herpes

•  Remission of many types of cancer

•  Healing of diabetic lesions and varicosity

Like most effective therapeutic substances there can be side effects. With MG they are few but noteworthy, yet not harmful and causing acute healing and cleansing in only two cases. They mostly occur from over-application or in acute cases. Let us look at our first case.

A 32-year-old male in good health with a healthy diet consumed 2 oz of 1.5% MG, then sun bathed for several hours. Later that evening a massive welt type boil, not infected,  started to form in the upper middle of  his forehead. It persisted for many days oozing body fluids from an ulceration at center and being very painful to the touch. No other issues were noted other than a small scar that remained. This happened twice under the same conditions. We have repeated the experiment twice with larger amounts with no reaction. He believed it was mercury, from his over forty fillings, that had been mobilized by the gold as it easily amalgamates with mercury. He noted that the point of the boil was an area of major nerve ganglia in the head.

The use of MG for general skin care and wrinkle reduction is great, but some women might experience accelerated facial hair growth. This was the case with a 52 year old woman that loved the effects the MG had on her skin. Unfortunately, the hormone issues were compounded when it came to hair growth. The good news was that the hair receded when she stopped application. This is a desirable result for male pattern baldness on the other hand, and we have seen minor hair growth in some people.

The application of a higher percentage MG can have substantial effects on systemic infections. David had a deep infection in his foot that 1.5% MG was not treating so he applied 4.25% and suddenly his foot was burning with terrible pain. Then slowly puslike fluids poured from his pores which then accelerated, as the swelling in his foot reduced over several hours. The burning persisted for two days but he was back walking in two more days after being incapacitated from an infection that had him crippled for many weeks. In the following photo you can see the secreted dried fluids looking like pimples and reddish webs. 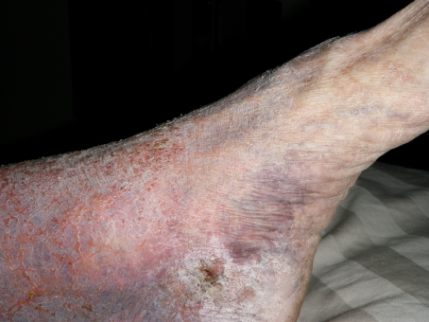 The photo was taken 24 hours after application, the small wound by his heal was the source of infection. Since MG saved David’s feet from amputation, they are still very prone to infections. The other note about MG is that it does not seem to be very effective against bacteria in “open wounds”. We use colloidal silver for that, but MG does wonders for accelerating the wound healing.

So, what is the actual causal pathway of MG? A few have been discussed so far such as bio-catalytic effects and mobilizing of heavy metals through amalgamation. We look at this subject in greater depth in our next article.

Conclusion:
We see that MG can be effective in many different areas of need and that it seems to bring about a remission in many cases and sometimes a complete cure.
It works both internally and topically addressing various the health problems in different ways. Each protocol has its own type of application, specific concentration strength, and period of topical application or ingestion.
MG does not appear to kill bacteria in infected surface wounds, but goes right after systemic problems.
MG seems to be activated by the sun and this is probably due to increased tissue penetration as a result of “surface plasmon resonance”.[2]

May you enjoy great health,
A Contributing Health Coach

Health Disclaimer:
All content found at The Health Coach is for information purposes only. Therefore, the information on this website is not a substitute for professional medical care and should not be construed as either medical diagnosis or treatment. All information contained herein ought to be considered within the context of an individual’s overall health status and prescribed treatment plan.
Since The Health Coach does not diagnose, treat, mitigate, cure, or heal any type of disease or medical condition, the information contained at this website is not intended to provide specific physical, mental, emotional or psychological health advice.
It is entirely the reader’s decision to act or not act on any information at The Health Coach. Therefore, we fully invoke the HOLD HARMLESS clause for those who are responsible for putting any of this information into practical use and application.

Permission is granted to post this health blog as long as it is linked back to the following url: http://thehealthcoach1.com/?p=1328